My brothers, show no partiality as you hold the faith in our Lord Jesus Christ, the Lord of glory. 2 For if a man wearing a gold ring and fine clothing comes into your assembly, and a poor man in shabby clothing also comes in, 3 and if you pay attention to the one who wears the fine clothing and say, “You sit here in a good place,” while you say to the poor man, “You stand over there,” or, “Sit down at my feet,” 4 have you not then made distinctions among yourselves and become judges with evil thoughts? 5 Listen, my beloved brothers, has not God chosen those who are poor in the world to be rich in faith and heirs of the kingdom, which he has promised to those who love him? 6 But you have dishonored the poor man. Are not the rich the ones who oppress you, and the ones who drag you into court? 7 Are they not the ones who blaspheme the honorable name by which you were called?

8 If you really fulfill the royal law according to the Scripture, “You shall love your neighbor as yourself,” you are doing well. 9 But if you show partiality, you are committing sin and are convicted by the law as transgressors. 10 For whoever keeps the whole law but fails in one point has become guilty of all of it. 11 For he who said, “Do not commit adultery,” also said, “Do not murder.” If you do not commit adultery but do murder, you have become a transgressor of the law. 12 So speak and so act as those who are to be judged under the law of liberty. 13 For judgment is without mercy to one who has shown no mercy. Mercy triumphs over judgment.

14 What good is it, my brothers, if someone says he has faith but does not have works? Can that faith save him? 15 If a brother or sister is poorly clothed and lacking in daily food, 16 and one of you says to them, “Go in peace, be warmed and filled,” without giving them the things needed for the body, what good is that? 17 So also faith by itself, if it does not have works, is dead.

18 But someone will say, “You have faith and I have works.” Show me your faith apart from your works, and I will show you my faith by my works. 19 You believe that God is one; you do well. Even the demons believe—and shudder! 20 Do you want to be shown, you foolish person, that faith apart from works is useless? 21 Was not Abraham our father justified by works when he offered up his son Isaac on the altar? 22 You see that faith was active along with his works, and faith was completed by his works; 23 and the Scripture was fulfilled that says, “Abraham believed God, and it was counted to him as righteousness”—and he was called a friend of God. 24 You see that a person is justified by works and not by faith alone. 25 And in the same way was not also Rahab the prostitute justified by works when she received the messengers and sent them out by another way? 26 For as the body apart from the spirit is dead, so also faith apart from works is dead.

2:1-7
Here we see James return to his “tell it how it is” way and revisit his train of thought in 1:9-11. The world is a place rampant with politics, preferential treatment, partiality, favoritism, and discrimination. The church must not be! The church must be the one place where everyone is on equal footing – no matter one’s occupation, income level, demographic, the clothes you wear, etc. – because the truth is all are on equal footing as sinners in need of grace in the eyes of the Lord.  Therefore to show favoritism is to show that one does not understand the Gospel.  Here we see echoed the words of Christ in the Sermon on the Mount, “blessed are the poor in Spirit for they shall inherit the earth.”  The mark of a true believer is their acknowledgment that they are lowly and in need of God’s grace.  Regardless of one’s earthly bank account  we are all spiritually bankrupt were it not for Christ.

2:8-13
This passage is really a continuation of verses 2-7 and continues the train of thought.  Verse 10 though is an interesting one for it corrects popular thinking.  Many in the world believe that God judges on a Good/Bad Scale whereby he tallies all the good things you’ve done and all the bad things you’ve done and then sends you to Heaven or Hell depending on whichever side of the scale weighs more.  James interjects and reminds us that even if we had only sinned once (what a colossal understatement!) we are guilty of breaking the whole law and still stand in need of God’s saving mercy and forgiveness.

2:14-17
This is the start to a train of thought that has become highly controversial and is often seen as contradicting Paul who teaches that salvation is “not of works, it is the gift of God, lest any man should boast.”  First off, as stated before, James would not have had Paul’s writings in front of him (or at all) and thus would not have thought anything of the way he words things in this passage.  Secondly, the teachings of both men are really not contradictory at closer look and actually serve as a great balancing tension for one another.  For example it is Paul himself who also says in Titus 1:16 – “They profess to know God, but they deny him by their works. They are detestable, disobedient, unfit for any good work.”

A helpful way to look at it is to differentiate between the various elements at play in the transforming work of grace.  Paul is often most focused on the initial justifying element of faith and James more so on the sanctification such justification ignites.  Paul is asking, “How are we justified – meaning, how are we declared “not guilty” before God?”  The answer – through faith alone in the work of Christ on our behalf. James is speaking to those already claiming to be saved and really then focuses on sanctification – the rest of our lives after we are justified, and when we are then being conformed into the image of Christ.  James is in effect asking, “How does one know they have been justified and are now being sanctified?” The answer – look to your daily lives. Has your faith taken root? Can it be evidenced? You say you have faith, but if so, show me your works. Good works and obedience are the outward indicator of what has happened inwardly.

2:18-26
Pay careful attention to verse 19. There is a huge difference between believing mentally that there is a God and actually being in relationship with this God through Christ.  James proves this by reminding us that even Satan’s own servants, the demons, believe that God is real and in fact they even tremble when thinking of his awesome power.  In this way, the demons are even more reverent than many today in our own society who mock or disregard God!  Mental ascent to the concept of God though is not enough to save a person, they must be in relationship with Him by having their sins forgiven and welcomed through Jesus Christ, in whom God dwelled perfectly and bodily.  As said before, here is where James is actively drawing a line in the sand between those who are Christians in name only and those who are truly followers of Jesus Christ.  Again, here then is where James argues for works.  Just as a tree is known by its fruit, so a Christian is known by his outward life.  In this way, you can see what James means by verse 24 when he says, “a person is justified by works…” They are justified in the sense of proving that justification (being declared not guilty by Christ) has actually happened.  They are in a sense, justifying their justification!  The great Reformer, John Calvin, said it best when he said, “we are saved by faith alone, but the faith that saves is never alone” meaning it is faith in Christ that saves but that faith will always be accompanied by action as its validating mark. 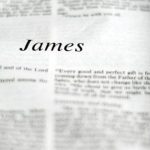